If you know anything about me you know I like a good laugh. And Drew Hayes has given me many great books with some great laughs. With his Spells, Swords, & Stealth

books and Forging Hephaestus (I haven’t gotten to his Super Powereds series yet but book one is on my kindle) but I think out of all his books Fred the Vampire Accountant has given me the most laughs. And I am supper happy to say Fred’s 4th book will be out in just a few days, I think Fred would appreciate the correct dates and everything so on 07/25/2017 to be exact. I got a chance to ask Drew some questions so of course I asked stupid ones. But he seamed to enjoy it, and hopefully he will be back again.

Q: How long did it take you to find Kirby Heyborne for Fred, the Vampire Accountant series?

A: From my perspective, it didn’t take very long at all. Usually Tantor Media (the company who does my audiobooks) will send me a few narrators to check out for each new project. With Fred, there weren’t many people in the mix on the first round, and as soon as I heard Kirby speak I knew we’d found the voice of my undead accountant.

A: Funnily enough, it started during a Fred release. I have a tradition where every time I get a 5-star review on release day, either from my speedy readers or those who had ARCS, I do a shot and post a picture. That day required quite a few shots, until I was rather buzzed and chatting with Robert Bevan of Critical Failures. We were just talking about gaming, I was in a hilariously bad superhero game at the time that I wished we’d taped, and from there the idea snowballed. We reached out to fellow writer friends, found some who gamed, and it all went from there.

A: I’m sure I would find no end of tweaks to make, fixing bad habits I’ve since broken and cleaning things up. That said, I wouldn’t change anything about the core story itself. I liked how Super Powereds: Year 1 came out, and I’m happy with the story as it unfolded.

A: I’m sure I have. That’s not always a bad thing, though. There’s a language to covers, they’re meant to let a prospective reader know what sort of tale they are in for. If you see half-naked people kissing on the front and don’t like romance, then there’s nothing wrong with realizing you are not that book’s target audience. A cover should, ideally, draw in people who will like what your selling and let those who wouldn’t dig it know they can move on to something else.

A: Not only did I have a side-character steal some of the show, I gave the guy his own spin-off. Corpies was a book following a side-character from Super Powereds and putting him in the spotlight. There are more I’d like to focus on as well, although some are harder to create a whole book around than others. Sadly, that means until I come up with a killer plot the world will have to wait on a Johnny Three Dicks standalone novel.

A: Anansi Boys, by Neil Gaiman. I’ve loved other books more, but none ever quite had the same feeling of magic when I first read them.

A: I have written 15, and when The Fangs of Freelance (Fred #4) comes out that will be my 14th to be published. The missing novel was from way back when I did my first ever web-serial, and while I did finish it I don’t expect it will see the light of day as a published work anytime soon. It’s not terrible, but it very much reflects how new I was to writing at the time.

A: You don’t realize how much of your social interaction comes from work until you begin staying home all the time. So you start talking to your dog, a little at first, and then more until you realize that the dog left the room. Cut to a year later and you’re walking down the aisle of a grocery store mumbling to yourself about Doritos, because talking to yourself has become second nature. It’s a hazard they never warn you about.

{I have the same problem as a reviewer with audiobooks. I crackup for no reason apparent to anyone around me all the time}

A: A shitload of empty wishing wells.

A: For the first part, my company lawyers (which are me, only wearing a tie) have advised me to plead the fifth. For the second, it’s impossible to say unless we drill down. If you mean main characters, I think I’ve only killed one on the page, although plenty died in backstories. If we start including nameless pawns, however, I genuinely have no clue. The Spells, Swords, & Stealth folks have seen a lot of corpses in their travels.

A:  When I started, I had ideas of doing serious, action-oriented stuff. Okay… Dresden Files, I wanted to do Dresden Files. But I never landed that tone well at all, and my early readers called me on it. It wasn’t something I wanted to hear at the time, but when I really went back and looked at my work, they were right. The parts that were hitting well were the funnier bits, where I was writing more as me than what I wanted to be. So I steered into it, giving the humor more room to run, and my work improved a lot. As an odd bonus, I found that with comedy to play off of, I actually could write serious moments, I just had to choose them with more care.

{I love the humor in your books, but you definitely know how to throw a gut punch to the feels}

A: When I’ve gotten emails from folks telling me how my books got them through rough patches in their lives. I’ve needed books to escape in as well, so it means a lot to hear that I’m giving that to other people.

A: I try to, when they ask, but the truth is unless they have a specific question it’s hard not to fall back onto the canned answers, because they’re all true. Read and write constantly, hire a good editor, and give up on the idea of the book coming out naturally and beautifully. Writing takes effort, and first drafts are usually awful. Accept that, and realize that you can go back and edit to make something good, but there’s no way to tweak a blank page.

A: Mustache Shenanigans by Jay Chandrasekhar.  It was the story of Broken Lizard, including how they made Super Troopers and Beerfest, so yeah, it was a fun read.

A: When does The Fangs of Freelance come out? July 25th. And if people want to celebrate the release with me, they can do so at my annual Facebook Digital Release Party, which includes Q&A, live-streams, prizes, and, hopefully, shots. They can check it out here https://www.facebook.com/events/327971990965631

{I’ll be there and you can also preorder on amazon and at http://www.reuts.com }

A: Got any fun personal traditions of your own?

{There is one with my 3 kids that started when they were 12, 10, and 8 years old.  One day I was driving my daughter home from school and she was kind of sad and not herself so I poked her arm and then acted like I didn’t when she looked over and I kept doing it every time she looked away. Until she started laughing.  Now there are so many rules to the game its impossible to win. Like It doesn’t count if driving north on a street that starts with a G.  When all 4 of us are in the car at the same time the rules get really complex. OH yeah and my kids are now 21 19 and 17}

Here is a Goblin animation of the intro The Utterly Uninteresting and Unadventurous Tales of Fred, the Vampire Accountant. 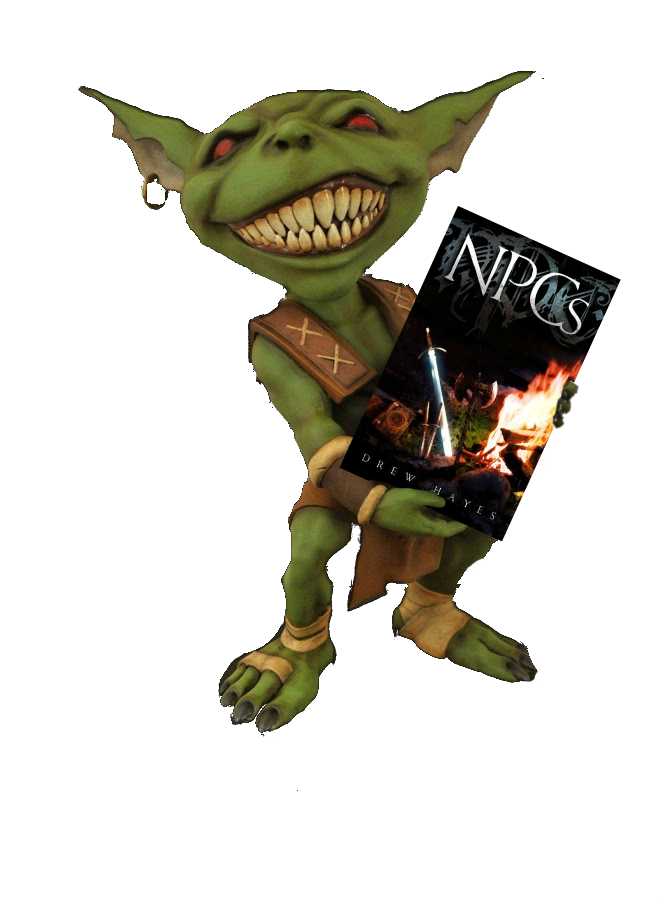 One thought on “Interview with author Drew Hayes”