THE INFERNAL BATTALION (The Shadow Campaigns #5)

To give this review the attention it deserves without spoilers is pretty much impossible, so I am going to do it different then I normally do. So if you are not familiar with this series, what the hell is wrong with you? Um I mean…   I’ll explain it a bit but without spoilers, then you can go get the hell out of here while I talk to the cool kids. It is written in 3rd person with multiple POV’s.  Most of those POVs are from solders and there are enough huge battle scenes to make John Woo happy.

The story takes place in a world with the technology equivalent of the early 1800’s.  When you have the same kind canons and muskets that Napoleon would have used what else are you going to do, but go to war. Right?

Well that is exactly what general Janus bet Vhalnich does. Even though it is hard to tell if he is a genius or insane or both, we soon learn one thing about him. He always has a plan for everything, and he loves it when a plan comes together. 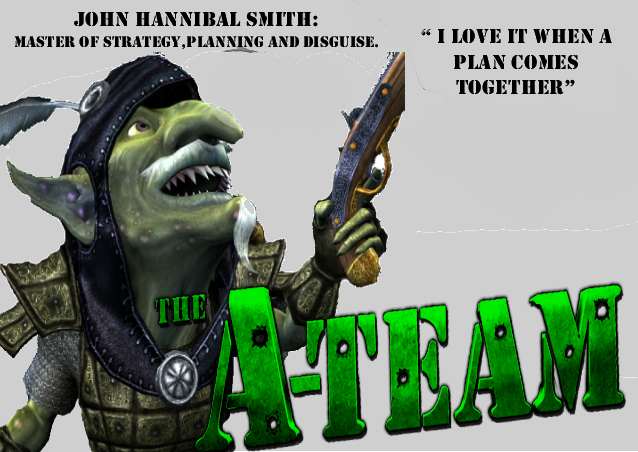 Oh, and there are demons, a lot of them. Like close to a thousand and they have names that are really hard to pronounce. I guess that needs some explanation doesn’t it? They come from a place of darkness and they need a host to survive in the world. The demons don’t actually have a body of their own. They are summoned by a person reading their name and if the person lives through the reading (I told you they were hard to pronounce) the demon becomes a part of that person giving them magical powers. For the most part the person is still in complete control and the demon is just happy to be watching out of the host’s eyes. The abilities very greatly from healing the host of any injury making them just about immortal to the ability of turning in to a sand storm a traveling with the wind.

But that is enough back story. If what I said so far sounds cool to you, here is a link to book one The Thousand Names and after you have finished it and the next 3 in the series come back and read on. For the rest of you let’s move on to the review of The Infernal Battalion.

OK are all the newbs gone? I am assuming they are so when I say things like, “Do you remember how Marcus got hit by that cannon ball at the end of The Guns of Empire?” I am not spoiling anything. Hey! You! Yeah, the one in the back nodding in sympathy, yes you. I was just testing everyone to check reactions. Marcus never got hit by a cannon ball. Go on get out of here. OK from this point on I am assuming you have all read up to the end of book 4 because if not even the Blurb for The Infernal Battalion is a spoiler. In fact I don’t really give anymore spoilers then the blurb does so if you have already read that you can stay. But here it is.

The Beast, the ancient demon imprisoned beneath the fortress-city of Elysium for a thousand years, has been loosed on the world. It absorbs mind after mind, spreading like a plague through the north. The fell army it has raised threatens the heart of Vordan, and it is under the command of the Beast’s greatest prize: legendary general Janus bet Vhalnich.

As Queen Raesinia Orboan and soldiers Marcus D’Ivoire and Winter Ihernglass grapple with the aftermath of a hard-fought military campaign, they soon discover a betrayal they never could have foreseen. The news arrives like a thunderbolt: Janus has declared himself the rightful Emperor of Vordan. Chaos grips the city as officers and regiments are forced to declare for queen or emperor.

Raesinia must struggle to keep her country under control and risks becoming everything she fought against. Marcus must take the field against his old commander, a man who has seemed an unbeatable strategist. And as Winter recovers from her injuries and mourns her losses, she knows the demon she carries inside her might be the only thing standing between the Beast and the destruction of everything in its path…. 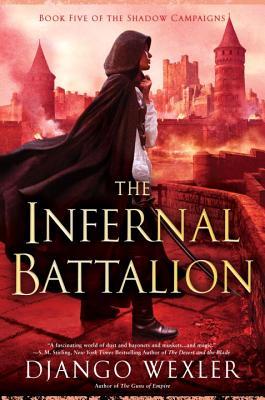 Every cover in this series has been beautiful and while this one is as well, it falls short in portraying what lies beneath that cover.  Although as I sit here trying to picture what could represent what is inside I am starting to like the cover more. In fact, the only thing I can come up with is from the very beginning when Winter is thinking about not thinking. Otherwise there is just too much action to pick one scene.

Here is my Goblin Cover based on that scene. 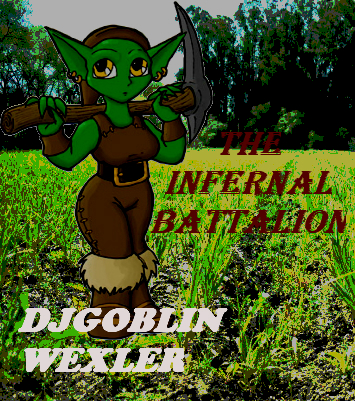 I won’t quit my day job of pillaging villages just yet.

Ok now about all that action. There has been some amazing battles in this series and Django really shows the courage of the men and women that risk everything in them. He writes it so well that you can really feel the fear and desperation of the solders. But I was truly blown away in one scene in particular that made me feel such respect for those fictional people that I was really struck dumb for a minute.  That’s my tribute to the imaginary brave men and women of the Vordan military.

Now when this book starts everything looks really bad and it is from where the last one ended. Winter just lost Bobby and found out Jane is the new host for the Beast. Marcus and the army are in bad shape after they make it back. Worst of all the Beast has Janus, but even from the prologue I was reminded of something I should have never forgotten. Never give up on Janus!

“The Beast laughed, a crackle of warring lightning. “Need, little mind? Do not speak to me of need.” “You must need something,” Janus said. “I will grow,” the Beast said. “I will consume. Forever.” “But you have enemies,” Janus said. “What can threaten you?” The Beast’s voice dropped to a growl. “The devourer. Infernivore. It must be destroyed.” The Beast searched the memories it had accumulated, including Janus’ own. “Winter Ihernglass bears it for the moment. She must be killed. And the Thousand Names, where its summoning is recorded, must be destroyed. Then I will be secure.” There was a moment of silence, aside from the ever-present howl of the wind. “That should be straight forward,” Janus said. “Would you care to hear my plan?” “

Like I said before there are a lot of great battle scenes, but a few with Winter are on a much smaller scale than we have really seen before in the series. I am happy to say that the author did not disappoint at all with them either. Even though this is the final book in the series and the action and pacing never really let up, there is never that rushed feeling that so many series ends suffer from. With that said one of my favorite parts was actually one of the only slow parts of the book, and it was when we learned a bit about Janus as a child.  We learn more about not just Janus’s history though, and there was one REVELATION that I did not see coming at all. I should have but it took me totally by surprise, and I loved it!

The setting is unique and interesting. The action and battle scenes are well thought out and brilliantly executed.  The characters even the non POV ones are skillfully written and fleshed out. This is definitely one of the best fantasy series that I have come across in recent years. The Infernal Battalion earns 5 stars from me. I highly recommend this series and look forward to the next project by Django Wexler.

Get a copy of The Infernal Battalion