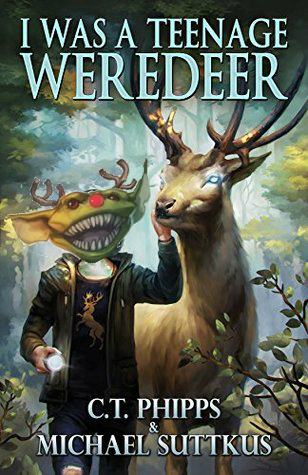 I Was a Teenage Weredeer (Bright Falls Mysteries, #1)  by C.T. Phipps

If you have been HUNTING for something good to read, then you MUSK check out I Was a Teenage Weredeer.  Now I am not usually one to FAWN over books of the Urban Fantasy genre, but this one really hit the mark. …….. OK OK I know my little puns are not that punny but the book is full of them that are. So I will try to REIN myself in and LEAF (They eat leaves right?)  WERE was I? Oh yeah. The BUCK stops here and I will leave the puns to the professionals because I CARIBOU what you think of me.

Let me be serious for a second and say it is a great story. In a world much like that of the TV show/book series TRUEBLOOD (With less BUCKSKIN on display) The protagonist is a teen Weredeer named Jane Doe (yes really) that works at her parents’ CALFITEREIA (that one is no good um..) her parents’  BEASTRO called the DEERLIGHTFUL DINER (that one wasn’t me)  When her brother is arrested for the MURDEER of her best friends sister who also happened to be the granddaughter of the head of the local Werewolf pack things get a bit WEREd (Help I can’t stop!)

Jane has the ability to Psychically read objects and see who has touched them recently. So it would only take a second to touch the body and case closed right? Well not quite. But it is a fast paced series of events that ANTLER ….I mean branch out from that point all the way to the end. With some really great side characters, a few that even threatened to push Jane out of the HEADLIGHTS .  You know, in HIND sight this isn’t even punny anymore.

A fast paced MURDEER mystery that starts at a fast lope and never slows down. While there is plenty of humor and teen/deer angst it also deals with some complex subjects both real and paranormal, and it DOEs it well. Jane is a great character and in all honesty, I have never met a character quite like HERBiVORE. (Admit it that one made you laugh) I highly recommend I Was a Teenage Weredeer and give it 4.5 stars out of 5

10 thoughts on “Hobs Review of I Was a Teenage Weredeer (Bright Falls Mysteries, #1) by C.T. Phipps”