Dominion of Blades by Matt Dinniman .

For over thirty years, Dominion of Blades has been the hottest online role-playing game in the world. Any gamer with an immersion rig can enter the world of sword and sorcery, of goblins and dragons, and they can hack and slash their way to glory. But the game is too real for some, and after an epidemic of real-life fatalities, public use of the immersion technology has been banned, causing the game to be shut down.
Jonah wakes to find himself in-game, level one, with no memory of how he arrived and no way to eject. With only two companions, trapped in a world that once hosted millions, Jonah must battle his way across a treacherous landscape, fighting virtual monsters, all-too-real pain, and a very human enemy in a desperate bid to survive.

The cover for Dominion of Blades is OK I guess. I mean the helmet looks cool and all, but … well that is it. It’s just a helmet and it is not even on someone’s head.  And I know this doesn’t matter at all but the part of me that makes chainmaille and cosplay has to say that the helmet design is just a tad bit silly. It is a Burgonet style helm but the crest is way too big and heavy and the aveantail is at a weird angle and oddly stretched out. I am pretty sure it wouldn’t fit unless you happened to be a hunchback of some kind.  But I am just saying this to show off my rarely used obscure armorsmithing knowledge and to fit in this pic of a hunchbacked goblin wearing the helm.

The only real problem I have with the cover is that it doesn’t give any insight into what the book is about. Actually the helmet is supposed to be the loading screen for the game Dominion of Blades, but since it is not a real game that’s not really very helpful to catch the eye of readers.  I am going to come right out and say that that is a real shame, because this is definitely a book that more people should read.  This was one of the winners in my 2017 Goblin awards and even though it has taken me this long to actually write the review I still can’t quite get over how good it was.

Let’s face it most LitRPG book are pretty juvenile. Fun quick reads that don’t require you to think much. They are enjoyable but promptly forgotten.  Dominion of Blades is a LitRPG book but it is one of the rare ones that manages to actually have a great sense of humor, fully fleshed out characters, and most importantly, what really sets it above the others, a deep and well thought out storyline.

The story starts with … well, I guess you could say it starts with a bit of an ominous tone. And I am not even talking about the epigraph from one of the top video game villains of all time.

The actual start is just as truthful and gives you just about as much hope as Glados did. 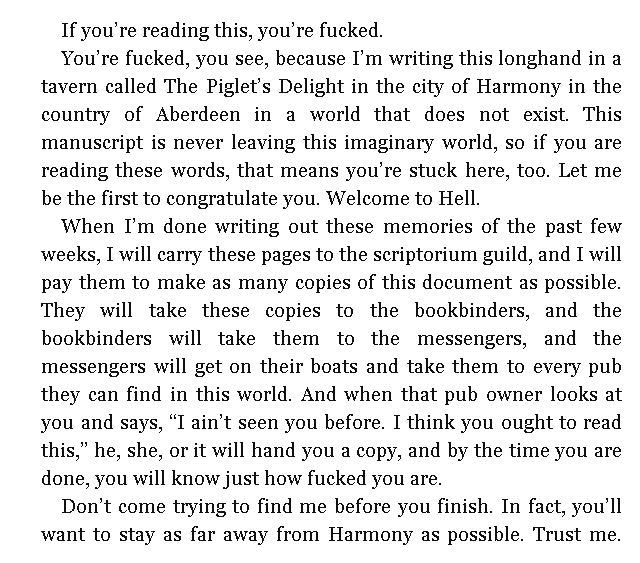 But as we go past these foreboding lines and the story starts. We meet 2 of the main characters Jonah and Gretchen as they start to understand things in their small town are a bit odd. Have you ever walked into a room for something and forgot why you went in there? Well imagine if you suddenly realized you had been going back and forth from one room to another for a long, long time. They have been stuck as NPC’s in a time loop and thanks to a glitch they are able to break the cycle.  When they do they have no memories of who they really are. That mystery and how it is solved is one of the best things about this book so I won’t ruin it for you. But I will warn you that one or more of the characters fits in to the LGBQT community, but don’t let that worry you. First of all it is just a part of who they are and not a big deal in the story. Second of all if that shit worries you, you are an asshole and no one wants to be an asshole so get over it.

I read an Ebook version of Dominion of Blades when it came out and then got the audio of book 2, The Hobgoblin Riot and I loved the job that Andrea Parsneau did so much I picked up an Audiobook of DoB and I have to say she brings a whole new dynamic to the story and made me love it even more. She is not just one of the best female narrators I have come across but one of the best Narrators period. I really love her interpretation of these characters and her range is amazing.

Dominion of Blades stands out of the LitRPG crowd and shines as a great fantasy book in its own right. So even if you are not in to the LitRPG thing I recommend you try this one out. Great prose realistic characters and just an all-around fantastic story make this a book everyone can find something about it to love. Do yourself a favor and pick up the audiobook, E-book or even a physical copy at one of the links below.  Obviously I loved it so it should come as no surprise that I give Dominion of Blades 5 stars for both the Digital and Audio versions.

Get a copy of Dominion of Blades