This is a spoiler free review for Iron Gold. However there are some spoilers for earlier books in the series.

First let’s talk about the cover. At first glance it is pretty damn empty, I mean a burning feather? Woo hoo.    You might even be thinking, “Don’t they even try anymore?”  Well if that was you, kindly shut the fuck up. Thank you very much. This cover gives me chills every time I look at it. Why? Take a look back at the cover of Red Rising.

The wings on the cover symbolized so many things, but mostly they are the perfect representation of the final 3 words of Morning Star

Well, thinking of those feathered wings as the embodiment of all poor old Darrow’s hopes and dreams then looking at the cover of Iron Gold again.

You have fucking Goosebumps don’t you?  You’re welcome.

Actually I want to take a look back at those hopes and dreams to refresh those of you that may have not read Morning Star in a while. This little clip is the audio of the final 2 min 40 seconds read by the one and only Tim Geroblin Reynolds. I know it’s kind of spoilery but pretty much the whole thing is a quote on goodreads.com so I thought it would be prime, but still DO NOT WATCH IF YOU HAVE NOT READ MORNING STAR!!!!!

That is the last we saw of Darrow and all the other Blodydamn howlers until.

“He feels the tug on his body. The pounding of his heart. The mad cackling of the Goblin and the howls of his friends as they try to forget their children, their loves, and be brave. Nausea in his gut rises as the magnetic rails charge behind him. With a shudder of metal, they fire him forward through the launch tube out into silent space at six times the speed of sound.

Men call him father, liberator, warlord, Morning Star, Reaper. But he feels a boy as he falls toward the war-torn planet, his armor red, his army vast, his heart heavy. It is the tenth year of war and the thirty-third of his life.”

If you are a Rising fan you just got chills again. Hell even if you had never heard of these books those are some powerful words.  That is how Iron Gold starts. The first two paragraphs and damn shit gets real, real fast. What happened to being a builder and bouncing his kid on his knees that Tim just read to us? Well real life rarely has a happy ever after and these books are not about a fairy princess.  That Realness is one of the best things about this series. Yes, it is a First Person Science Fiction story, but each person we meet through Darrow’s eyes feels like they are real. Like when you are not reading they have other shit to do and when you get back they might come up to you like this.

“Sevro sniffs my neck and makes a noise of distaste. “By Jove. You wretch. Did you dip yourself in piss before the occasion?” “It’s cologne,” I say. “Mustang bought it for me last Solstice.” He’s quiet for a moment. “Is it made out of piss?” I scowl back at him, wrinkling my nose at the heaviness of liquor on his breath, and eye the ragged wolfcloak he wears over his ceremonial armor. He claims he hasn’t washed it since the Institute. “You’re really lecturing me about stenches? Just shut up and behave like an Imperator,”I say with a grin.”

Oh how I love Sevro au Barca. He is called Goblin and it almost feels like he is a real person. Unfortunately he is not, but he actually is a real goblin. Everyone I would like you to meet Sevro my new writing partner/ book model. 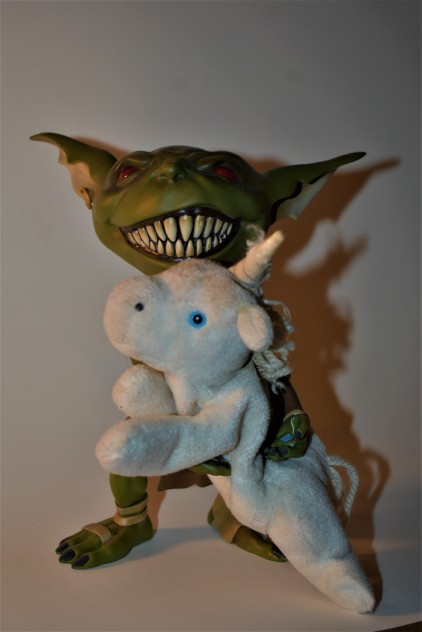 I am not sure how he managed to get that Beanie Baby Unicorn away from Terry Pratchett’s Luggage, but he won’t let it go now. 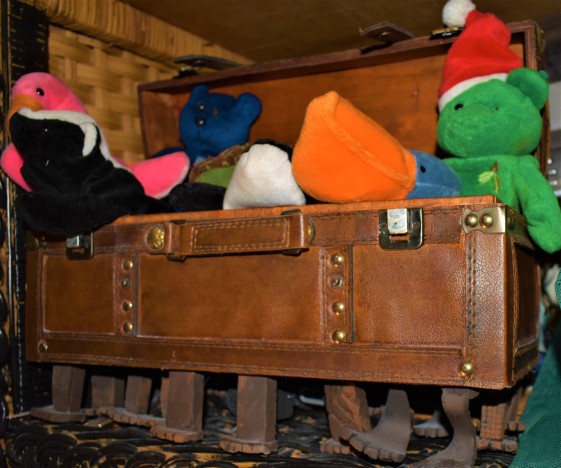 Don’t worry Bob is still around, but he just wasn’t able to hold the books properly. (on account of him being just a skull).

Now getting back to that quote. That is why I love this series so much.  The quote above is the first actual dialog in Iron Gold and in that one small paragraph I was with my friends again. It had been a while since I had seen them but I have thought of them often.

First person POV is supposed to be immersive. It fills the reader with a sense that they are participating in the drama and uncertainty experienced by the main characters. When I heard that Iron gold was going to have multiple POVs I worried that he would change to second or third person but that was not the case. He stays with the first person that he writes so well.

Pierce has a prose that is beautiful, almost poetic at times yet still remarkably forceful. I wondered if it would be possible to keep the power and force in his writing and still give each POV a unique voice. Would they all sound like Darrow or would the prose I loved be lost or at least diminished when he wrote the other POVs “voice”. But have no worries my friends, I am happy to say he did an excellent job in really making each of the four sound like separate people with their own speech patterns and style. While keeping that excellent page turning prose I love so much.

Of the 4 POV’s we of course know who Darrow is.. He is the Bloodydamn Reaper that’s who. So I won’t bore you with any more info about him.

Second is a minor character in terms of how much we have seen him before.  But he is fairly important in terms of the story. His name is Lysander and he was the heir of the Sovereign. He was just a kid but still a dangerous lose end in political terms. We know Cassius stopped Sevro from killing him at the end of Morning Star. You may wonder what he has been doing since then. Well I said this was going to be a spoiler free review so stop asking me questions like that! I will say that he has grown up on the run with interesting companions. He is my favorite of the new three. I really enjoyed his story line.

Next we have Ephraim. He was never actually in the books before. However you may recognize the name. He was engaged to Trigg, Holiday’s brother and is mentioned a few times. It took me a while to get to like him, but I did in the end. He is kind of Emo but he grows on you.

I yawn in the humid dark, craving a burner because the vapor inhaler I’m sucking on is about as satisfying as fucking through a tarpaulin sheet. My left foot is numb and sweating through the sock in its rubber shoe, and my right arm is bent so awkwardly into the stone that my knock-off Valenti chronometer is drilling into the bone of my wrist with every. Arterial. Pulse. The only thing that has kept me sane over the past nine hours has been the holocontacts I bought off the rack from that that lemur-looking bastard, Kobachi, on 198th, 56th, and 17th in Old Town. But the contacts shorted out, and now I’ve got a corneal abrasion and worse, plenty of time to kill. Perfect

The last one is completely new. Lyria is a Red and even though she is a Gamma I liked her right from the start.

Sky. That’s what my da would call the roof of stone and metal that stretched over our home in the mine of Lagalos. It’s what we all used to call it, going back generations of our clan to the first Pioneers. The sky be crumbling. The sky needs reinforcing. It stretched over us above like a great shield, keeping us safe from the fabled Martian storms raging outside. There were dances for the sky, songs wishing it luck and blessings. I even knew two lasses named for it. But the sky wasn’t a shield. It was a lid. A cage.

I have read many books that made me feel emotional. A few have made me even tear up a bit near the end.  But this is the first book that had me needing a tissue by chapter 5. Seriously I had to put the book down for a bit to get the lump out of my throat.  Yes it is Science Fiction but the way it is told is gritty and real and doesn’t pull any punches. And trust me this series will punch you more than a few times right in the gut. Hard! It is, simply put the best Sconce Fiction series I have read and this new installment just made that position all the stronger.

It is a remarkable story and it has been masterfully written.

Even though Iron Gold won’t be released for a few more days (1-16-2018)  I can’t wait to get my hands on Dark Age (Red Rising Saga #5) and with its expected publication date of September 11th of this year I thankfully won’t have to wait that long. Obviously you can see that I loved this book so it should come as no surprise to you that Iron Gold receives 5 out of 5 stars from this goblin.

Just recently Iron Gold was nominated for several awards in my Second Annual Goblin Awards post and won Best Science Fiction book of 2017. Yes I know it wasn’t out in 2017 but it was just that good! A year ago I decided I wanted to start making some kind of trophy for the first winning author I met that year. It was supposed to be Brent Weeks but he ended up canceling his stop in Arizona on account of the flu. This year I will be seeing Pierce on the 20th of this month and giving him a trophy I made that is pretty cool. I will post a picture of it after the event but want it to be a surprise until then. If you are in the Phoenix valley area and go to the signing say hi when you see me I will be the one in the wolf cloak. If you have a question for Pierce Brown leave it in the comments. I will pick the best one and ask him if I can. 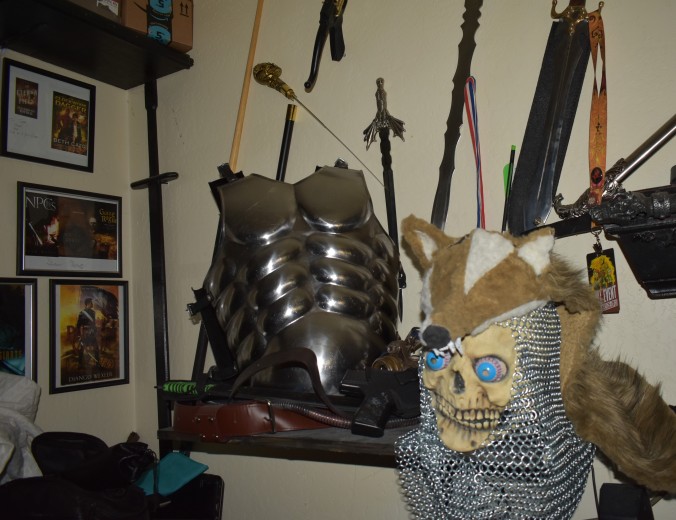 It is not finished yet

If you are a fan of this series come join us on  Facebook in Hic Sunt Leones: A Red Rising Fan Group

Leave a Reply to Hob The Goblin Cancel reply