Question:  What do Alternative History

novels and NASA’s Goddard Space Flight Center have in common?

Answer:  This guy right here. Alan Smale  is a professional astronomer at NASA, studying black holes, neutron stars, and other bizarre celestial objects. However, too many family vacations at Hadrian’s Wall in his formative years plus a couple of degrees from Oxford took their toll, steering his writing toward alternate, secret, and generally twisted history.

If you know anything about me you know I love books. I love everything about them. In one way, they are a door to a different world, the start to a new adventure that can be had anytime you need to escape just a bit from the adventure you are already on.  The other way they amaze me is how they came to be on the page. I don’t mean how many hours did the author sit at a desk typing. I like to know a bit about the authors life and then while reading see if I can recognize where a certain influence or idea might have come from. With some authors that can be a terrifying spiral that once at the bottom I just want to ask the author if they are OK.  (I am looking at you Michael R. Fletcher. I am not a professional but if you ever need to talk I am here), and with others I can just see them sitting there collecting the tears of their readers as a trophy for each one. Possibly Fletcher here again or one of his Doppel’s but also most certainly Mark Lawrence and Pierce Brown .)

That is why, when I do Interviews I hardly ask about the books themselves. I ask stupid “get to know you” questions that are fun, for me at least (and that’s what’s important, right?) ways to see hidden depths in their writing that maybe even the author didn’t know were there. For example, this question I put to Darrell Drake.

Darrell: A. To the side, the fifth child has no toys—no trucks or baubles—only its gas mask. He watches and waits, hands in his lap, knowing the sleeping gas is imminent. His peers never learn, and that’s why his rise to the top will be swift and uncontested.

{Thanks for that insight in to your childhood Darrell I am here for you buddy!}

Actually, that shit is mainly all a lie. I am just really bad at interviews. Plus it is a great way to introduce a really interesting author I got to meet this year at the Phoenix Comic-con . The author of the only book I bought the whole weekend! I still don’t know how I did that! I just went costume shopping and accidentally bought 27 books instead.

(No lie. Here they are, and I still didn’t get a costume) 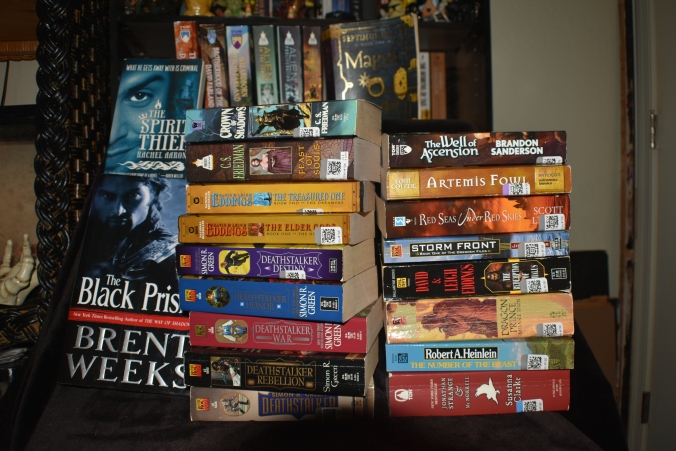 It is also a way for me to thank the great people that worked behind the scenes at the Del-Rey booth this year. It is thanks to them giving me free books and the authors signing them that I am able to spread the smell of a new book to you guys. Like the one we just did with Pierce Brown and the Upcoming one with Robin Hobb.

This book, Clash of Eagles  by Alan Smale has a great cover and that’s why I stopped to take a look at it. It was the premise though, that made me buy it.  Imagine a world in which the Roman Empire has not fallen and the North American continent has just been discovered. In the year 1218 AD, transported by Norse longboats, a Roman legion crosses the great ocean, enters an endless wilderness, and faces a cataclysmic clash of worlds, cultures, and warriors.

Since Yesterday (The 9th) was Mr. Smale’s Birthday, I Thought it would be the perfect time to start the giveaway for a signed copy of Clash of Eagles.

The giveaway will run from now until the 29th of September 2017. To enter just make a comment below. One winner will be chosen randomly on that day. Open to everyone. Good Luck to you all! Don’t forget to make a comment before you go and since you are here already why not enter my other giveaway here.

Sorry I am late ending this giveaway. I was out of town and then sleeping for a few days. But A winner has been chosen. Congrats go to my fellow blogger Mogsy!