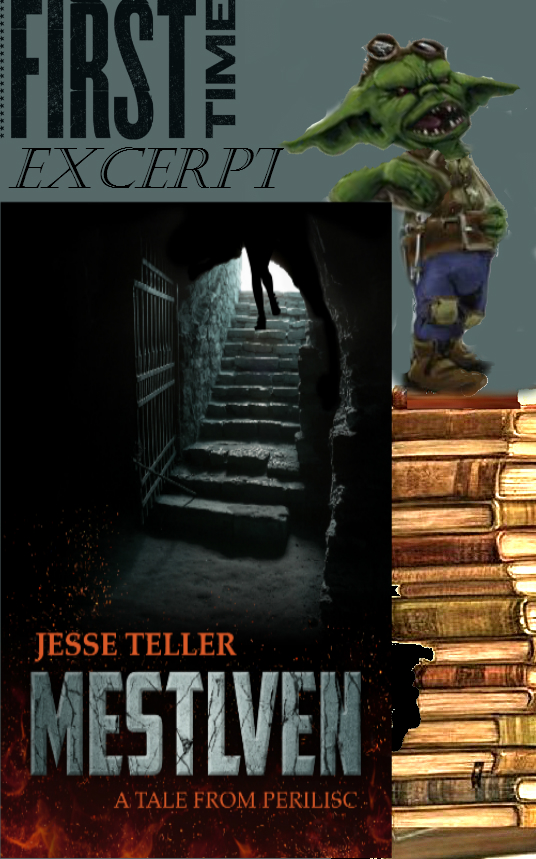 This is my first time Posting an excerpt so I am just going to post it and then put all my amazingly witty and hilarious stuff down at the bottom……. Excerpt is a strange looking word, isn’t it?

OH I should say this is From Mestlven: A Tale from Perilisc by Jesse Teller.

You know, if you didn’t get that from the title. Anyway here it is.

Festival of The Pale

The Pale, the goddess of death, fixed her rotting eyes squarely on the city of Mestlven where grew a darkness, patient and terrible. Her murder lifted from the battlefields of Corlene to swoop and brood on Mestlven’s roofs and scream at her citizens. Enormous crows, two feet tall with four-foot wingspans, terrorized the city and ate her trash, her vermin, her dead. When those sources of rotting meat and bloated flesh ran out, the crows began hunting her young. The coming of the crows marked the goddess’s intent for the city to host her annual festival. The clergy of The Pale arrived in force while her citizens cringed and waited with dread.

Mort arrived in Mestlven on the eve of the festival, her garrote stashed in the cuff of her robe, her dagger hanging from her hip. She murmured the prayers of The Pale and witnessed the spectacle of the massive city. Built by a long-dead race of giants, the scale of the buildings reached beyond her understanding.

Her wagon lurched ahead, rumbling along the cobblestones. The idols it carried trembled. Navigating the hills and winding alleys of the city proved difficult. Citizens pressed in tight to see The Pale’s cloth march through their streets like the slow and steady onset of some plague. Hunched over the reins of the wagon, Mort was used to the way they stared, fear branded on every face. Her brown wool cloak, befitting a priestess of her rank, gave no hint of the trim body she hid within its folds. They could not hope to guess her size. With the grinning skull she had painted on her face, and the scowl their pie-eyed looks teased up from her, she knew their fear nearly crippled them. No city wished to host the Festival of The Pale, but for some reason the goddess’s considerable murder had chosen this town. Mort found her anticipation growing.

For long years she had been a brown robed priestess of The Pale. She longed for advancement within her order, for a better understanding of her goddess and a closeness to The Pale that had been lacking these past months. She thought again of her bishop’s groping hands and the rage they had inspired in her, and she felt at odds with her church’s leadership and its goals. She had never been chosen to attend the Festival of The Pale before, but she knew something grand was about to happen.

The Grim stalked ahead, the personification of The Pale in the world of man. She rode the great albino horse that never died, and a black fog issued from the hem of her rotting robes to crawl the ground in all directions, seeking out the corners and recesses of the city. She carried the staff that claimed everything before it. Mort had never been so close to The Grim, and her excitement for the festival brought her near to panting.

The procession stopped at the center of town. The Grim dropped heavy to the street beside her mount, and with a clawed hand, stroked the beast’s muscled flank. She shuffled forward, dragging her feet and leaning heavily on the staff until she reached the very center of the courtyard. There, she slowly lifted the staff a few inches from the ground and held it aloft.

“Wretched mother of death, we come to this place at this time to make tribute and receive tribute in your honor.” The Grim’s prayer broke across the air, dry like the rattling of bones. “I claim this city for the duration of the festival for you and your enjoyment.”

She slammed the staff into the ground. The street trembled as a circle of power exploded in all directions and embraced the entire city. The crows lifted into the air, screaming as they stained the Mestlven sky as black as a cloud of noxious gas issuing from a ruptured corpse.

Mestlven: A Tale from Perilisc
Revenge, Insanity, and the Bloody Diamonds
Meredith Mestlven was abused and betrayed by her nobleman husband. After a desperate fit of retaliation, she fled for her life and lost her sanity. Now nearly 20 years later, she returns to her home at Sorrow Watch to destroy her enemies and reclaim her jewels. How far will she go to satisfy her revenge? Dark, cunning and beautiful, Mestlven will win your heart or devour your mind.

Jesse is giving books away!!

To enter, just follow jesseteller.com via email or WordPress by July 16th. On July 17, 2017,  he will randomly select winners from his blog followers. 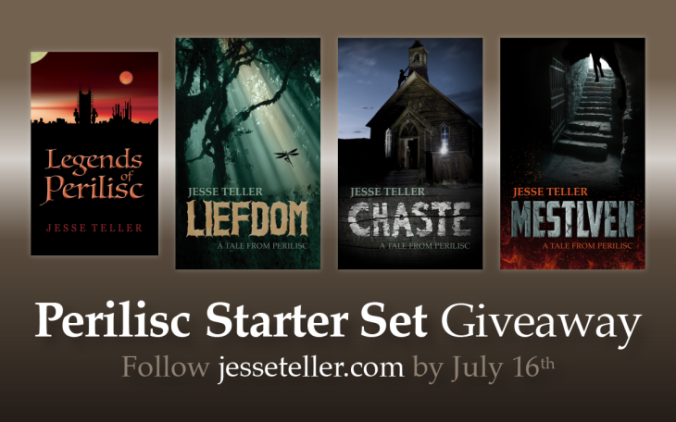 Five (5) winners will receive a digital version of the Perilisc Starter Set: Liefdom, Chaste, Mestlven, and Legends of Perilisc in the format of their choice (mobi, epub, or pdf available).

One (1) grand prize winner will receive signed paperbacks of the Perilisc Starter Set: Liefdom, Chaste, Mestlven, and Legends of Perilisc.

Jesse Teller fell in love with fantasy when he was five years old and played his first game of Dungeons & Dragons. The game gave him the ability to create stories and characters from a young age. He started consuming fantasy in every form and, by nine, was obsessed with the genre. As a young adult, he knew he wanted to make his life about fantasy. From exploring the relationship between man and woman, to studying the qualities of a leader or a tyrant, Jesse Teller uses his stories and settings to study real-world themes and issues.

He lives with his supportive wife, Rebekah, and his two inspiring children, Rayph and Tobin.

What? Why are you still here? Oh I was just kidding about the amazingly witty and hilarious stuff. You should know me better than that by now. I will be posting a really great interview with Jesse Teller that I will link here, but for now its 4:00am and I am all out of witty things to say. I guess I am witless.

2 thoughts on “Excerpt from Mestlven: A Tale from Perilisc by Jesse Teller”