The Blurb
For hundreds of years, the flame-wielding Embers have been the last line of defense against the nightmare creatures from the World Apart, but the attacks are getting worse. Kole Reyna guards Last Lake from the terrors of the night, but he fears for his people’s future.

When Kole is wounded by a demon unlike any they have seen before, the Emberfolk believe it is a sign of an ancient enemy returned, a powerful Sage known as the Eastern Dark.

Kole has never trusted in prophecy, but with his people hanging on the precipice, he reluctantly agrees to lead the Valley’s greatest warriors in a last desperate bid for survival. Together, they will risk everything in search of a former ally long-thought dead, and whether Kole trusts him or not, he may be the only one capable of saving them.

This is one of those books that sat, well definitely not lonely but I guess you could say neglected on my virtual TBR pile for way too long. I have so many EBooks on my Kindle that at times it feels a bit overwhelming. But enough about my problems let’s talk about this book. First of all, I love the cover. It tells us a bit of the story without reveling too much. Plus, I think it is pretty. As far as the editing goes it was very polished for a self-published debut book. I am actually reading book 2 that was just released right now.

Now let’s discuss the meat of the book. Or if you are a vegetarian the tofu? Hmmm… would the Characters be the meat and the plot the bread? What would be the lettuce? Now I am just hungry and confused……. So how about we just talk about the characters.

I liked the main ones and was glad they were all experienced in battle at the beginning. Even though most of the actual POV’s are from young people they were living in a world where fighting for your life is a normal thing. So you don’t have to worry about the young boy becomes sword master in a day trope. The author did a great job of portraying extremely competent fighters that are still kind of dumb when it comes to other things. I guess what I am trying to say is that they felt realistic.

Now lettuce…. Errr let us talk about the lettuce? The writing style is good my only complaint would be some of the dialogs, when a group of people are talking I sometimes got confused about who was saying what. Other than that, I really enjoyed the style.

FINAL THOUGHTS
A refreshingly original take on the old Epic Fantasy story. Written with a great style and including great characters. This is a book definitely worth your time to read. I give Valley of Embers 4 stars out of 5. 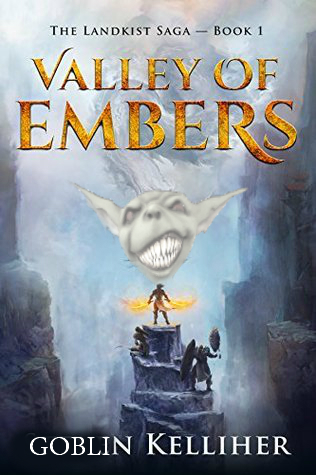 Get a copy of Valley of Embers