by Richard A Knaak

Since he became the guardian of the Gate between our world and Feirie sixteen hundred years ago, Nick Medea, once Saint George, has battled to keep the darkest Feirie–the Wyld–from invading the mortal plane. With the dragon an unwilling part of him, Nick maintains balance between realms, often at great cost to him and those nearest to him.
Nick and his ragtag confederates–including the shape-shifter Fetch and Nick’s reincarnated love, Claryce–have battled the Wyld, but mortals as sinister as the darkest Feirie. Now, with Prohibition in full swing and bootlegger wars embattling Chicago, a murderous evil born of the mortal world has turned its attention to the power of the Gate…and Nick himself.
Nick must turn again to his most untrustworthy ally: the dragon within. Yet even together they may not be enough to face what was once a man…but is now a creature even dragons may fear

Here is a photo of Bob wearing a real 1930’s hat that belonged to my grandmother while getting ready to read . 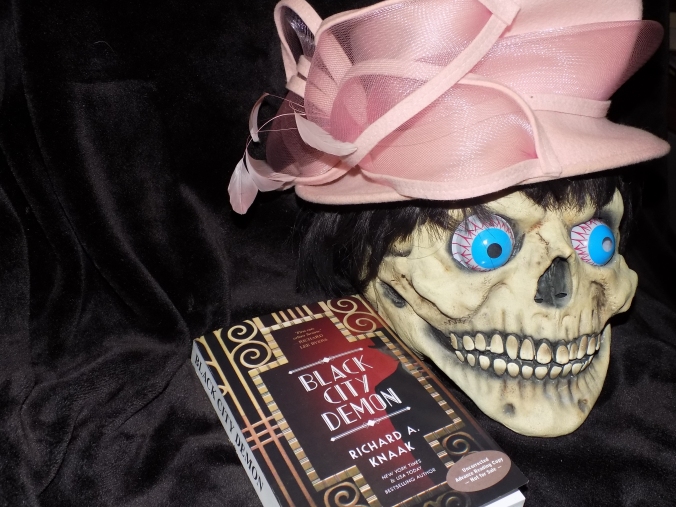 Before I get to the Chin Music lets talk about the physical attributes or the Gams of the book.

The cover is pretty Spiffy and maybe you could even call it Hotsy-totsy. The editing was spot on I didn’t see one comma out of place and I was reading an ARC. I also liked the big print I guess my Kindle is kind of spoiling me with its zoom but I may need to get me a pair of Cheaters soon.

Now let’s Get a Wiggle on and get to the story morning glory.  I have Carried a Torch for this series since I read book one last year.  I still think book one is the cat’s meow but I have to say book two is just about Berries. I am not one to just Beat My Gums for no reason. If you like any type of crime or detective books I am sure you will like this series. Not to be a Wet Blanket but I don’t usually like those types of books. but this book is Air Tight with me anyway.

Let’s try a bit of normal talk, if I can still do it. Ab-so-lute-ly I can talk normal, See.

Now you all know I don’t like to describe the plot much and I don’t do spoilers. That said talking about a second book at all is hard. I will say I love the Characters. Nick is just as solid as I expected but not as level headed as I remember. I blame that on Claryce, she sure is a  Bearcat.  But also on the Dragon he really wants to toast the town (not in a good way) and is constantly trying to take charge. But once again Fetch the slang talking dog-thing stole the show.  I love that fuzzy …. whatever he is.

My only Beef with this book is the bad guy. It was just plain that he was bad and well, it didn’t take any detective-ing to know who it was. But a lot of trying to find out what he was up too. But I guess that’s how it was supposed to go because it was obvious from the start and the author was not trying to hide the fact. The ending Sockdollager alone was worth the read.

Did you know Goblins are great dancers? Here is a photo of a goblin Jane that was a famous Flapper back in the day. While she was sitting back drinking a cup of Noodle juice 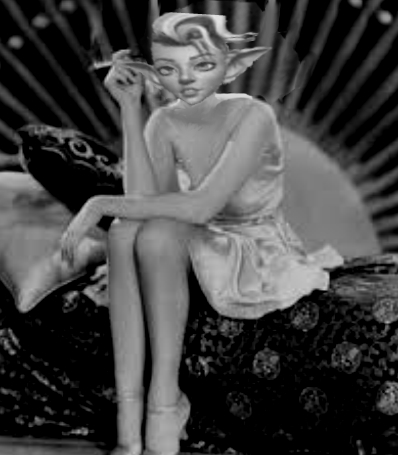 It is a great book, with great people filling the pages. The plot was good but kind of predictable. I feel this would be an enjoyable read for Fantasy fans as well as Mystery readers. I am going to give Black City Demon 4.25 stars out of 5

And how!: I strongly agree!

beat it: scram, get lost.

beef: a complaint or to complain.

caper: a criminal act or robbery.

Carry a Torch: To have a crush on someone

cast a kitten: to have a fit. Used in both humorous and serious situations. i.e. “Stop tickling me or I’ll cast a kitten!” Also, “have kittens.”

get a wiggle on: get a move on, get going

hip to the jive: cool, trendy

Nerts!: I am amazed!

Not so good!: I personally disapprove.

“Now you’re on the trolley!” Now you’ve got it, now you’re right

pinch: to arrest. Pinched: to be arrested.

prom-trotter: a student who attends all school social functions

prune pit: anything that is old-fashioned

razz: to make fun of

Sockdollager: an event or action of great importance

weasel: a young man who steals a girl from her boyfriend

You slay me!: That’s funny